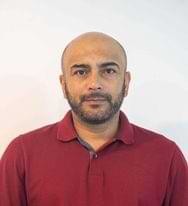 Bikas Rauniar is among Nepal’s most celebrated photojournalists. He has captured images of personalities from former slain royals of Nepal - including King Birendra, Queen Aishwarya, Crown Prince Dipendra and last monarch Gyanendra - to politicians, and from actress Manisha Koirala to cricketer Kapil Dev.

The list of newsmakers the 54-year-old veteran has photographed is very long.
In 2016, he photographed visiting British Prince Harry in Nepal who worked in earthquake reconstruction sites in a remote village of Gorkha.

In over two decades of his career, he might have captured many times more photos than the few hundreds that made it to the pages of Himal magazine, Independent weekly, Kantipur and The Kathmandu Post dailies and Nepal magazine.

As photojournalist, he has covered major natural disasters and political upheavals in Nepal, including People’s Movement of 1990, aftermath of Narayanhiti Royal Massacre, key moments of Maoist Insurgency 1996-2006, and numerous anti-government demonstrations. Younger journalists often look up to him for lessons and tips.

While most desk editors and online reporters remain in their offices, photojournalists have to be on the move, often rushing to various sites and scenes to capture moments as they unfold. That’s why they are more vulnerable to accidents, injuries and even attacks.

In an interview with MINUTE TALK, which features conversations with newsmakers, Rauniar suggested young and energetic photojournalists to “protect yourself first”, especially during risk-filled assignments such as violent demonstrations, scuffles and natural disasters.

He said: “Never position yourself between riot police and demonstrators; find yourself a safe location such as the window of a nearby building. If things turn violent, quickly get out of the police’s or the protesters’ way and get into a safe alleyway.”

After all, he added, nothing is more important than a photojournalist’s personal safety.

Even after his retirement, Rauniar remains busy, handling his family business - transport and freight forwarding, clicking photographs of key events and gatherings, training younger journalists and assisting his wife Samjhana Upreti Rauniar, who is a film producer and a director.