International Red Panda Day
Clarion call to protect endangered red panda (Watch)
With a population of fewer than 10,000 globally - and approximately 317-582 nationally, red pandas are listed as an endangered species

Red pandas are flagship and indicator species of the ecological health of eastern Himalayan temperate broadleaved forests and their distribution is limited to forests of Bhutan, China, India, Myanmar, and Nepal, with preferred altitudinal ranges of 2,400-3,900m above sea level. With a population of fewer than 10,000 globally - and approximately 317-582 nationally, red pandas are listed as an endangered species in the Red List of the International Union of Conservation of Nature (IUCN) and Natural Resources and Appendix I of the Convention on International Trade in Endangered Species of Wild Flora and Fauna, banning the trade of live species or body parts.

A recent study conducted by the government of Nepal reported the presence of red pandas in 24 districts of Nepal extending from Taplejung in the east to Kalikot in the west with a  majority of their potential habitats outside protected areas in either community forests or private forests. Over the past two decades, the global red panda population has plausibly dwindled by 50 percent. What’s worrisome is the fact that the decline is projected to continue, and probably intensify, placing the animal on the verge of extinction.

The International Red Panda Day is observed on the third weekend of September every year globally, with an aim to raise awareness on the plight of the endangered species of wildlife that struggles to survive across the Himalayan region. It also seeks to gather support for global conservation efforts. The Day is dedicated to elusive red pandas, and is aimed at raising awareness of their conservation significance as their population has dwindled dramatically over the years. Their numbers have dropped to less than 600 in Nepal.

Red Panda Network (RPN) first observed the day in 2010 with an involvement of 16 schools and a few international zoos. This year marks the 13th annual global celebrations of the Day, with a pledge to control poaching, trafficking, illicit trade in red pandas and help conserve the at-risk species and their habitats.

#InternationalRedPandaDay2022 lays emphasis on dissemination of critical information and busting of myths related to red panda pelts and parts. This goes a long way in controlling illegal trapping and poaching of red pandas which unfortunately rank among the top five heavily-poached and illegally-traded mammals in Nepal. The problem is fueled by poverty, unemployment, and limited conservation awareness.

More than just a cute face 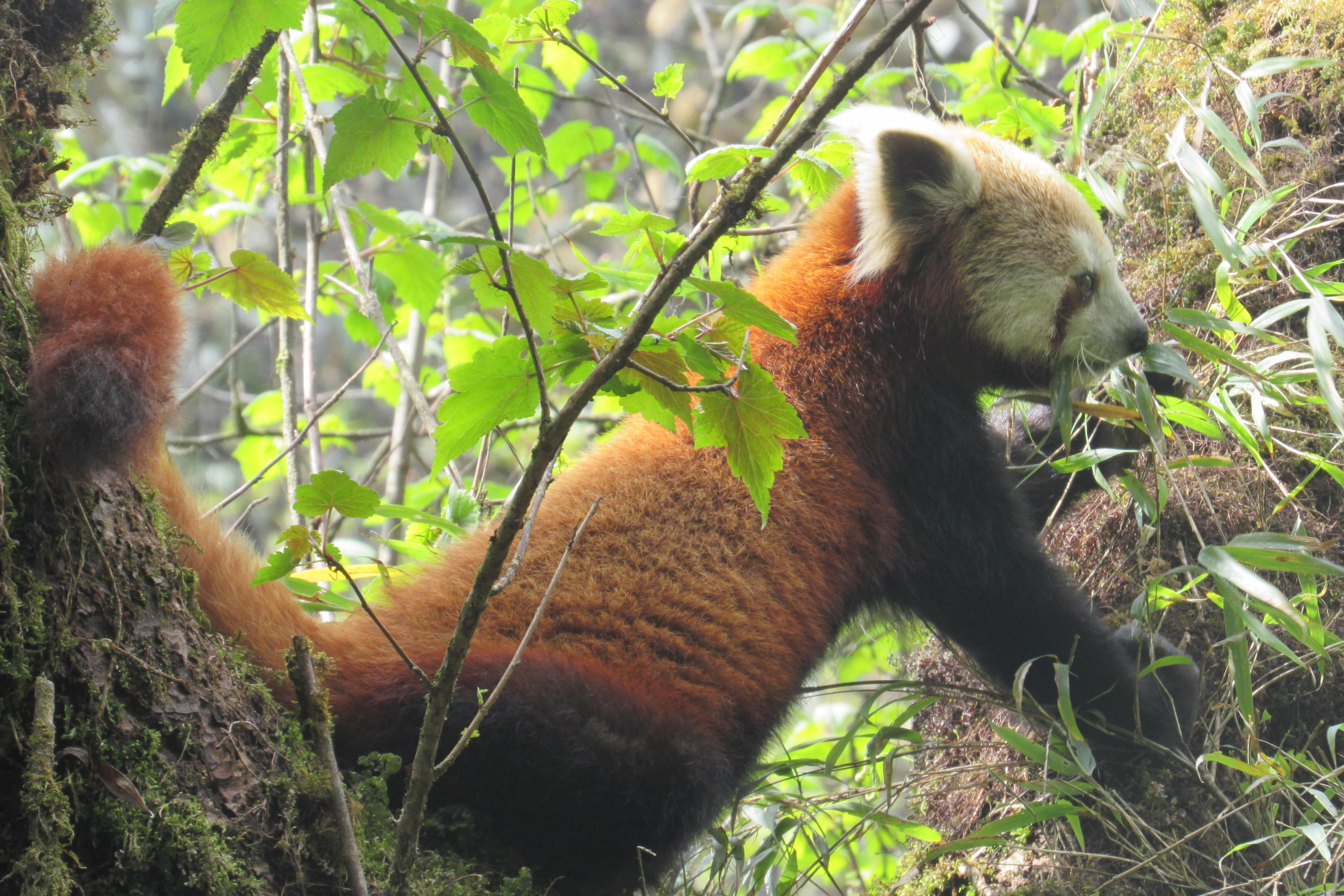 The tree-dwelling mammal of the Himalayas, red pandas, are unique and cute in appearance, serving as ambassadors for the landscapes that support over 500 million people. Sadly, they are now among endangered species which are under constant threat. Red pandas are the only animals of their family Ailuridae and their presence works as an indicator of a healthy ecosystem in the eastern Himalayan region. Conservation of red pandas and their habitats also benefit other threatened species, including the clouded leopards, Himalayan black bears, and other species that share habitat.

Despite sharing the same name - Panda, giant pandas and red pandas are not closely related except for their love for bamboo. While the giant pandas belong to the Ursidae family, red pandas belong to Ailuridae family. The study suggests that the elusive and enigmatic red pandas are of two distinct species - the Himalayan red panda and the Chinese red panda, based on their differences in morphology and biogeography. Belonging to two different subspecies allow conservationists to augment species-specific conservation action plans and recover dwindling populations of red pandas.

Red pandas inhabit biodiverse temperate forests with abundant bamboo understory and in close proximity to water sources. Although red pandas comprise carnivore-type digestive anatomy, they feed on highly specialised diets with bamboo leaves and shoots comprising over 83 percent of diet - which are supplemented with eggs, insects, and berries. Bamboo being a nutrient-poor plant, and red pandas having low metabolic rates, compel them to spend most of their time foraging and eating to meet nutritional requirements. Zoo observation suggests that the red pandas consume around 20,000 leaves each day.

The red panda, also called Rato Habre, is believed to be derived from the Nepalese term ‘Punde Kundo’ which translates to the animal with white face marks. Reddish-brown fur on the upper body and black fur on the lower part of red pandas offer great camouflage among reddish-brown moss and white lichens attached to the tree where they live, protecting themselves from predators.

The shaggy tail of red pandas with alternate red and white rings constitutes almost half of their entire body length. The ringed tail assists red pandas to keep them steady and maintain body balance while climbing through trees. Red pandas wrap long fluffy tails around to protect themselves from harsh cold winter weather. These arboreal mammals spend most of their time on trees and are crepuscular in nature – active mostly in twilight period, searching for food as their main diet, bamboo is low in nutrients, and have to eat a lot to maintain their energy level.

Red pandas, also alternatively known as firefox, lesser panda, shining cat, fox bear and so on are solitary mammals and prefer alone time except during mothers with cubs and mating seasons. Red pandas spend a majority of their time foraging and sleeping on tree branches and hollows. At a time, female red pandas give birth to one to four deaf and blind cubs locating their nest in hollow trees or rock caves. Unfortunately, red panda cubs have high mortality rates making it difficult to rebound dwindling populations.

Albeit protected in all its range nations, the prevailing threats of forest deforestation, habitat loss, degradation, fragmentation, and alteration, largely triggered by anthropogenic disturbances are the gravest threats to red panda survival exerting risks of extinction from an area. The threats are further compounded by limited conservation awareness, extensive livestock grazing, surging unsustainable harvest and consumption of forest resources, mass flowering and die-off of bamboos, accidental snaring in traps set for other animals, dog predation, haphazard developmental activities, and raging forest fire.

The escalating cases of poaching and illicit trade of red panda pelts are on the rise with 14 pelts per year on average between 2008 and 2021. In 2021, a record high pelts, 37, had been smuggled according to a study. Further, slack monitoring and increased human movements during Covid-19 lockdown played a significant role in the rise of red panda poaching and illegal trade in their pelts. That is why awareness and education on the ecological values, fines, and imprisonment associated with poaching, trafficking, and trade of red panda is extremely essential. Equally important, busting myths and misinformation on “high monetary values of red panda and body parts in the international market” is the need of the hour. Studies suggest that there is no definite market for red panda pelts. 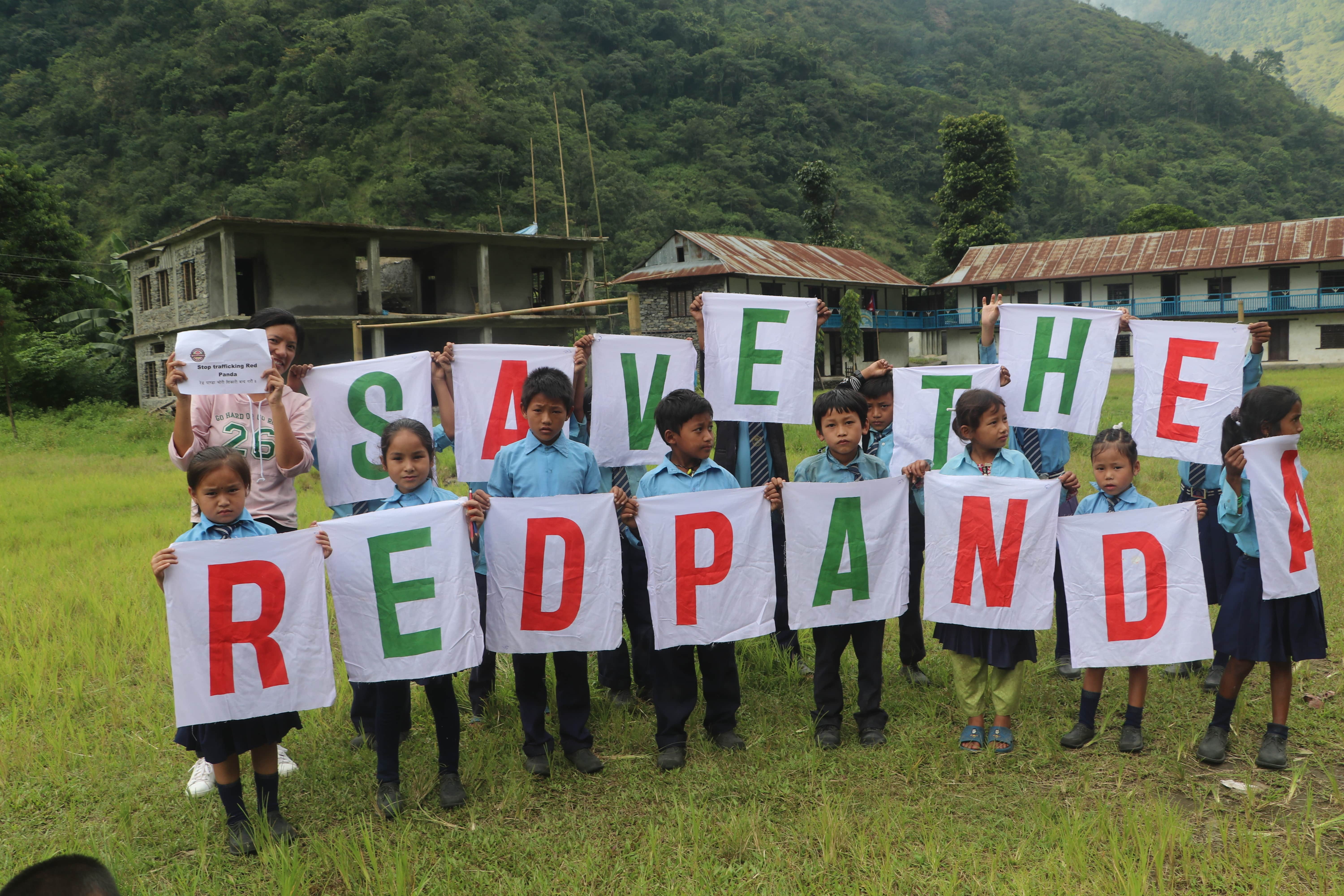 The landscape-level conservation approach adopted by the government of Nepal has helped better conserve red pandas and other species across mountain ecosystems. Red pandas are listed as one of the 27 protected priority mammals under the National Park and Wildlife Conservation Act 1973. As advised by the Act, the incarcerated offenders and accomplices associated with poaching, trafficking, and illicit trade of red pandas are charged with hefty fines of Rs 500,000 to Rs 1,000,000, or imprisonment ranging from five to fifteen years, or both, depending on the nature of the crime. In addition, there is also a provision of providing an award of up to Rs 25,000 for potential informants providing information on poaching or illegal trade in its parts.

In 2016, the first national-scale red panda status survey was conducted to assess baseline information on habitat status and national wide distribution of endangered red pandas in Nepal. The survey documented the presence of red pandas in 24 districts and seven protected areas of Nepal. Red Panda Field Survey and Protocol for community-based monitoring provides guidelines for students, researchers, and local community forest users on the uniform scientific methods for conducting research and monitoring of red panda.

Conservation interventions, with an emphasis on research and monitoring, education and awareness, habitat management and restoration, and sustainable livelihood programs are being implemented at the ground level by governmental and non-governmental organizations including Red Panda Network with the shared aim of protecting endangered red pandas and their habitats. The Network’s community-based red panda conservation model has been mobilising local communities to create anti-poaching units, conduct regular patrols and contain illegal activities. So far, they have been yielding positive outcomes.

(The author is a member of the Red Panda Network.)

Post Comments
Nepal Minute Watch Manaslu avalanche plays spoilsport ahead of peak climbing season
Related News
Sep 23, 2022 16 years after Ghunsa air crash, legacy of conservation heroes lives on The 20 conservation heroes who perished in Taplejung 16 years ago have inspired a new...
Sep 21, 2022 Cheetahs make a comeback in India after 70 years When the cheetah will run again … grasslands will be restored, biodiversity will increase and...
Sep 20, 2022 Chungba Sherpa captures photos of rare wild yaks in Lapcha-La, Humla The wildlife photographer spotted the wild yak at an elevation of 4,800 metres
Weather Update
1
In favour of a much stronger Nepal Airlines, the national flag carrier
2
Prem Geet 3 'gives kiss of life to Indian theatres' (Watch)
3
An ominous stand-off between Prime Minister and President
4
Thirty years after Nepal's worst ever air crash in Bhattedanda
5
Search on in Manaslu to locate missing US skier Hilaree Nelson; six airlifted to Kathmandu
6
Nepali rescuers recover body of famed US climber Hilaree Nelson
7
Manaslu avalanche plays spoilsport ahead of peak climbing season
8
Interpol issues ‘diffusion’ against Sandeep Lamichhane