Travelogue
Lapchi trek: Reminisces from a journey of a kind
Tucked away in northern Dolakha, Lapchi is not just a village with fifty households. It is a place for pilgrimage

It was November 11, 2022, nine days before the general election. While people were planning to head towards their hometown, enthused to elect their new leader, I chose to move farther away from home, the capital, the town, and villages.

I began my trek from Lamabagar, Bigu VDC 1, of Dolakha district, aiming to reach Lapchi in two days, which was also situated in Bigu VDC 1. It may take two days to walk across the same VDC in Nepal, and that is because our system allocates VDC boundary in terms of population. When you are on a trek, walking, climbing or crawling, or even driving, you measure distance in hours, because measuring it in kilometre is frustrating.

After crossing the Upper Tamakoshi dam on a boat, I was amazed and amused by the bluish-green river and layered mountains. When the trek had just begun, a rocky, stiff and land-sliding mountain cliff was waiting for me with a hanging rope. I reckoned, that was the contradictory ground reality of development scenario in our nation.

The lush green and moisten air were smoothening my breathe while my feet were struggling to stand safe on debris and my hands were checking the rope before every pull. While embracing being close to nature, I was leaving phone, internet and access to electricity behind. 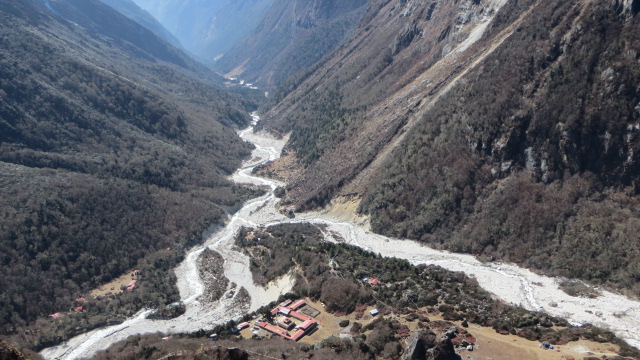 After three hours of walking I, with my most reliable guide, could view a colorful Buddhist flag fluttering in the air, giving the sign for human existence in the middle of nowhere. We were nearing our first station 'Deurali' for lunch. A limited space of flat rock in the middle of an unyielding mountain that was enough only for a shelter with an open kitchen with a shed, and a hut with two rooms without doors and windows.

Even to attend nature's call you either climb up or walk downhill. Yet, I was grateful to that kitchen-shelter that provided me a generous hospitality, which was built for the construction workers working in 160-megawatt Lapche Khola Hydropower Project. Somehow, the project technical experts had managed to have Internet access till here where there was only a flickering access to telecommunication network. Here they warned, "from here onwards no phone and no Internet at all!"

Not that I have not lived without any means of electronic communication before, but it used to be rather by choice. Here, there was something special. I had chosen the journey, not the isolation and detachment from the whole world. I was being trapped between choice and choice-lessness. The fact was, I was going to be out of network for next five days.

My target for the day was to reach Eluk before dark nearby Numnang. Numnag is a tiny village with approximately 15 households and a small area of arable land. This was the only arable land I could view throughout this journey. Every year people from Lapchi migrate down to Numnang to avoid extreme cold in winter.

As a trekking-ritual, I would greet to all the villagers and potters walking down towards Lamabagar. I was surprised to have found some of the potters began walking from Lapchi in the midnight and had a target to reach Lamabagar on the same day. That was the distance I had planned to cover in two days, hopefully.

This journey never stopped thrilling me. The locally made raw-wooden 'cantilever' bridges, without a support to hold on to, began to come one after another. You must check for its sturdiness before you put your foot on it. Who would you trust to hold on, to keep balance? The rocky mountain, the tiny plants popping out of rocks, your guide, or your own feet and hands? Or, your destiny? I tried them all.

Travelling allows you to passages that bring you new dimensions of experiences and ideas, and difficult travelling confronts your conditioned mind that you always try to keep safe within your comfort zone. It challenges your physical, mental and emotional strength for survival and brings all your inner contradiction to the surface.

There is one more thing that is reflected at the time of difficulty; your wish for a sign of hope, a hope for guidance, a guiding angel. And there it was! I saw two potters walking playfully towards us, holding head strap in their hands. Those potters had begun walking early in the morning together with me. They had dropped their weight at Eluk and now returning.

The path ahead was confusing. Without their guidance, I was sure to get lost in the jungle because, number one, my guide was going to Lapchi for the first time, just like me. Number two; it was soon to become dark. Number three; there were no street signs. Number four, no telecom network. Number five; there was no sign of human settlement at all before Eluk. Please allow me to stop counting after five. Anyways those potters appeared as the guiding angels, indeed.

On the second day, with hope of reaching Lapchi, we began our walk early in the morning. I had heard some stories of wild bears last night. I was scared, but not scared enough to sacrifice my beautiful sleep away. The first half of the day-walk was comparatively much calmer because there was a gravel road under construction. There was a plan to connect that road to Lamabagar, which was obstructed only by a kilometer long tunnel that was also under construction.

The Hydro Power and construction activities in the region showed tremendous potential for future development in the region. Both in numbers and in capacity, Dolakha district has the most Hydro Power projects in the nation, running and under construction. Hydro Power has become one of the most charming sectors for shares and investment market. Yet, there was a tiny little village in the same Dolakha district named Lapchi that existed safe in solitude.

The view of Buddhist monastery in Lapchi appeared as a solace before which there were several mountains and bridges yet to go across. I was relieved with freshness and a sense of accomplishment. Fragrance of herbs began to surprise me more often. By now, I had an experience of one and a half day in the route, based on which I had gathered enough confidence to conquer the land slides and reach Monastery.

There was no electricity supply and no telecom network in Lapchi. No health post, no police station and not even a single government office exists there. On emergency, the district official would take three to four days to allow permit for air ambulance, only for rescue missions.

Historically, culturally and practically this place has been surviving on religious values and practices alone. Lapchi has been a pilgrimage for Buddhist for centuries. It is believed that in 12th century, Milarepa, a Buddhist yogi meditated in a cave in Lapchi, where he attained nirvana and flew to the sky, leaving his foot prints on the rock.

The most intriguing part of the life of Milarepa was the transformation he went through in one life. From being an egoist man who used his power to kill hundred of people at once only to take revenge, he turned into a man free from ego and began to use his power only for spiritual awakening and enlightenment.

Finally, we reached Lapchi Monastery. There was a fire in the kitchen and people from various walks of life were sitting nearby the fire stove. The foreigners were there on a pilgrimage teaming up with Nepalese guides and porters.

There were few employees and a researcher from Gaurishankar Conservation Area Project (GCAP). The GCAP folks were installing and changing camera to document wildlife movements. Since the limited accommodation in the Monastery was already filled and the village was empty because people had already migrated to Numnang, we were grateful to Lama Loksyang for sharing his cozy monastery cabin with us.

The following morning, after getting our stomach stuffed 'Champa' – a  local diet food  – we began our next venture to see the foot print of Milarepa, which was fairly two hours walk straight uphill. With my growing knee pain, accumulated from last two days, I began to realize that walking to the altitude higher than 4,500 metres, on rigid and unforgiving rock could make anyone a pilgrim.

The knee pain and the merciless mountains had broken my ego into pieces. It felt, as if all the mountain peaks around me were roaring the words in silence 'you are nobody'. Yes, I became nobody. My body was numb and my mind became thoughtless.

Nepal-China boarder was an hour walk away from the village, as the locals said. Life before Covid-19 used to be little different and comparatively stable for the villagers. They used to go across the boarder to the Chinese market to sell cattle and dairy products while purchasing household supplies.

Now, the scenario has changed dramatically and drastically for the villagers, since the Chinese government sealed the boarder in lockdown three years ago and has not reopened it yet. The most pertinent issue for the villagers is to manage cattle. Earning from selling cattle and dairy products in Chinese market used to be their major source of income.

The stories in Nepal boarder, whether that is in the north or in the south, have always been different from how they are portrayed in a national and international scenario. People along the boarder share not only the trade and supplies they also share and celebrate language, cultural practice, good wishes and even weddings. To maintain harmony in the community is much more important to them than it is for the nations to keep peace in the world.

Interestingly, Lapchi people do participate in the election rituals whenever they come by. On the way down to Lamabagar, we met a team from the Election Commission of Nepal who were moving up to Numnag to conduct voting. They chose Numnang for the convenient of locals and the election commission.

A simple strategy of development suggests to move these fifty house hold from Lapchi to somewhere closer where they can have better access to transportation and communication. But, would it be justifiable for the people, by taking them away from their faith?

Lapchi is not just a village with fifty households. It is a place for pilgrimage. Though small in number, devotees from all over the world come here to practice devotion. If Lapchi people have owned this land and the nation, the state should not be indifferent to them. Not at all.